For a second week in a row, I did not buy books! Yay! Actually, LOL, I'm not sure if it's such a good thing or not. I mean, obviously good for my wallet and TBR pile, but what about my mental state and happiness? LOL. I guess we'll find out soon ^_^;

Anyway, since there's no Hauling Sunday post, I decided to catch up and go with a Week-End's Minis post :) I truly wanted to post this yesterday, but it was the annual BBQ! And I spent Thursday and Friday evenings grocery shopping and prepping for the BBQ. As usual, we had chicken wings and fish meat balls :) However, this year, we also had homemade sausages!! And my sister was in a baking mood, so we got green tea macarons and a Alaska Bomb cake!! 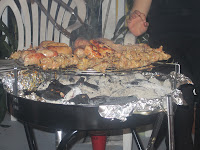 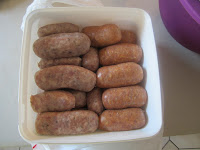 BBQ and homemade sausages. I LOLed when I opened the box. My friend had told me the sausages were fat, she forgot to tell me they were short! 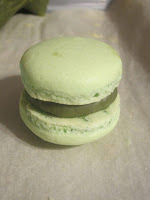 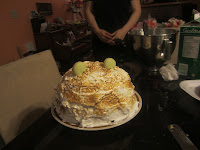 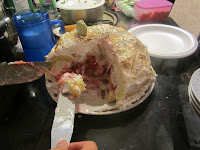 
Cath Talarico knows a mistake when she makes it, and God knows she’s made her share. So many, in fact, that this Chicago girl knows London is her last, best shot at starting over. But bad habits are hard to break, and soon Cath finds herself back where she has vowed never to go . . . in the bed of a man who is all kinds of wrong: too rich, too classy, too uptight for a free-spirited troublemaker like her.

Nev Chamberlain feels trapped and miserable in his family’s banking empire. But beneath his pinstripes is an artist and bohemian struggling to break free and lose control. Mary Catherine—even her name turns him on—with her tattoos, her secrets, and her gamine, sex-starved body, unleashes all kinds of fantasies.

When blue blood mixes with bad blood, can a couple that is definitely wrong for each other ever be perfectly right? And with a little luck and a lot of love, can they make last night last a lifetime?

What do you need to know? Cath Talarico was a daddy's girl and when her father passed away, she rebelled and got wild - very wild - and ultimately led to some very bad decisions. When her mother passed away from cancer, Cath decided to straighten up and be good. She moved to London to start over, taking a job in a museum... And she mainly has spent the last couple of years observing people. The one that has caught her attention is a man who often takes the same train with her whom she nicknamed City. Polished and successful, he's also very punctual and a gentleman. However, she never planned to start an affair with him! But he's very tenacious and she can't seem to shake him off... and very quickly, she's not sure she wants to.

City's real name is Nev Chamberlain and he works in the family banking's empire. He feels trapped because of his older brother and mother, who wants to pull the strings as if he was a marionette. Unfortunately, Nev has worked too hard in the business to start over in another company or to chase after his dream of being a painter.

Why this book? I had my doubts about getting About Last Night because I did not really enjoy Ms Knox' debut, Ride with Me. Ultimately, Kristie's review convinced me - plus, I love a good opposites attract romance :)

What did I like? I was really surprised at how much I enjoyed About Last Night, because I had definite reservation coming in. However, Nev just won me over :) I loved his character! Such a gentleman, but at the same time, he was not a pushover :) He didn't let Cath drive him away; instead, he went after what he wanted, her :) I also loved how patient he was and how he drew Cath to him. I also have to say, the chemistry between Cath and Nev was very good :) I did think the attraction between Cath and Nev happened a bit too quickly; however, in the end, it worked because of their chemistry and the fact that the two have been eyeing each other on the train for a while. And I enjoy the romance thanks to Nev's tenacity.

By the way, I don't think About Last Night was such an "opposites attract" romance as Cath and Nev weren't so different. Yes, their family backgrounds were opposite, but personality-wise, not so much. Both had reasons not to live freely, kind of hiding their true nature... and on a lot of subjects, they were on the same wavelengths. Truly, I just feel "opposites attract" was not really the theme Ms Knox was going for, but that's what marketing picked up. I don't really care though because I really enjoyed the book :) And most of it has to do with Ms Knox' development of the characters. She did a great job because Cath and Nev were both interesting and fully fleshed. Although I have to say, I did not enjoy Cath as much as Nev.

What didn't work? I really  had only one issue with About Last Night and that was Nev's idea to pretend he had elope with Cath to his family. I have to give credit to  Ms Knox because she didn't go about it the usual way and in the end, it was not the focus of the book - yay! However, it simply was really a bad idea and plot device for About Last Night and also, very unnecessary. I mean, since it was not the book main plot device, it also made the story very predictable. Ugh. Had it not been for it, About Last Night would have been an A for me.

My Grade? B+. Really enjoyed the book and will be giving Ms Knox another go in the future :)
Posted by nath at 5:06 PM