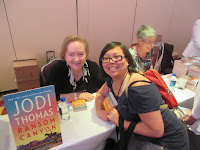 Not long before RWA, I discovered that Ms Thomas had a new series, Ransom Canyon, coming out with Harlequin. Even though the first book was slated to be released on August 25 - one month after the conference - I was hoping that somehow, she'd have the book available at the publisher signing... Guess what? She did!!! I think I first saw Wendy holding a copy and was so excited, I made a beeline to Ms Thomas to get my own and literally did a happy dance in front of her, LOL.

I figured since I was so excited to get the ARC, I should read and review it for its release. Plus, you know, there's always a thrill when you post a review before or on its release :) As if you're helping out the authors, but also your fellow readers by sharing your thoughts :)


Rancher Staten Kirkland, the last descendent of Ransom Canyon's founding father, is rugged and practical to the last. No one knows that when his troubling memories threaten to overwhelm him, he runs to lovely, reclusive Quinn O'Grady… or that she has her own secret that no one living knows.

Young Lucas Reyes has his eye on the prize—college, and the chance to become something more than a ranch hand's son. But one night, one wrong decision, will set his life on a course even he hadn't imagined.

Yancy Grey is running hard from his troubled past. He doesn't plan to stick around Ransom Canyon, just long enough to learn the town's weaknesses and how to use them for personal gain. Only Yancy, a common criminal since he was old enough to reach a car's pedals, isn't prepared for what he encounters.

In this dramatic new series, the lives, loves and ambitions of four families will converge, set against a landscape that can be as unforgiving as it is beautiful, where passion, property and pride are worth fighting—and even dying—for.

The Story: The blurb is pretty accurate. In Ransom Canyon, we're introduced to the small town of Crossroads, in Texas, situated in Ransom Canyon. It's what you'd imagine from a town surrounded by ranches - rugged. For a better understanding of the town and its origins, you can read Ms Thomas' e-novella prequel, Winter's Camp.

Ransom Canyon basically consists of three storylines that take place at the same time and intersect. The main one is about 43 years old rancher Staten Kirkland. He's been raised by his grandparents on the ranch and loves his land. Unfortunately, he's been plagued by lost - his wife to cancer seven years ago and his teenage son to a car accident, five years ago. Staten believes he can't love, can't be happy anymore. And when he's filled with grief and stormy feelings, he finds solace in Quinn O'Grady's arms... but unbeknownst to him, after five years, things are about to change.

The other two storylines are secondary and will most probably be continuous threads in future books. You have Lucas Reyes, a 17 years old boy with a good head on his shoulder. He is working his butt off to save money for college and has the next four years mapped out. Unfortunately, they don't include a romance with the sheriff's daughter... but friendship, that's another story. As for Yancy Grey, he's a 25 years old con who's just been released from prison. Yancy is ready to put his past behind him and starts new in a place where nobody knows him. Ransom Canyon and its elderly community seem to be a good pit stop, a stepping stone for him... but of course, your past always finds a way to catch up with you.

My Opinion: While I was very excited for Ms Thomas' new book, I was also a bit apprehensive because the blurb and set up of Ransom Canyon reminded me a lot of the Harmony series. All the reviews and actually reading Ransom Canyon confirmed my fear... but you know what? In the end, it didn't matter because Ms Thomas' writing and voice are so different from everyone else. Even if Ransom Canyon echoes the Harmony books, it's still very unique and enjoyable :)

My favorite storyline was Staten and Quinn's. They took me by surprise a little because of their ages ^_^; I've always preferred characters in their 20s to mid-30s, simply because I connect better with them. So when I started Ransom Canyon, I did a double-take and started doing some maths in my head to figure out Staten's age... and yeah, both were over 40 and therefore not in my usual age range. Then, there was the fact that Quinn was Staten's late wife's best friend. The widower falling in love with his late spouse's best friend is a common premise... and unfortunately, not one of my favorites ^_^; It's always hard to overcome the death of a loved one, but when you fall in love with someone so close, there's the added guilt, the sense of betrayal on both parts and the whole "we can't be together/I can't fall in love with you" baggage. Oh, I've read some good books with this premise, but as a whole, it's not one that I usually seek. However, I shouldn't have doubted Ms Thomas because of course, she had a different take on it :) I loved Staten and Quinn's romance because it was slow, gradual and oh, so private and intimate. There was such a bond between Staten and Quinn, a trust that you rarely see nowadays in romance because everything happens so quickly. I'd say Staten and Quinn's romance lacked the passion of a lusty, new relationship... but it was so powerful because of their intimacy - and I'm not talking simply sex. Their romance started off with Staten finding solace in Quinn's arms, his heart frozen by tragedies and I enjoyed his awakening. Also loved Quinn's character... such strength under her shyness and so much understanding.

I also enjoyed the other characters and their storylines. I'm looking forward to Lucas' growth and see what he'll become in the future. I liked his maturity and the goals he's set out for himself. There's a definite romance shaping up between him and Laurie, the sheriff's daughter, and I hope it won't be as long-winded as Reagan and Noah in the Harmony series. I'm still not sure about Yancy. He's an interesting character with a surprising innocence/naiveness for an ex-con that made him a bit unrealistic to me. Perhaps when his character is more developed and I see where his storyline is heading, I'll like him more.

Ransom Canyon definitively had a ranching atmosphere and to my surprise, I enjoyed it a lot. In the book, Lucas said: "To put it simply, Kirkland was a rancher and Collins was a businessman." It's exactly the same thing here - the ranch was an integral part of Ransom Canyon, feeling-wise and story-wise, and not just a setting... and I liked that. While Ms Thomas' towns are fictitious, there's always a down-to-earth feeling to them usually communicated through the characters' limited means. A lot of other authors address poverty, slow economy and resourcefulness in their books, but it never reaches me as much as when Ms Thomas does it. In Ransom Canyon, it really hit home through Yancy's character with his humble goals, dreams and riches. And the prominent ranching atmosphere adds another dimension, a ruggedness to the down-to-earth feeling that is perfect for this new series.