Woohoo, you gotta love scheduled post! Can't believe that I have at least one! :) Yay!  Since I'm writing this before I leave for Punta Cana, it means that the mini-reviews are pretty rushed. However, I think they reflect my opinions of the books, just not as polished as I'd like. Now, I need to catch up on the other months!


1) The Runaway Princess by Hester Browne: B

2) Heist Society by Ally Carter: B

I wasn't in the greatest mood when I read Sweet Deception, but despite everything, I feel the book was really so-so. Emma was an interesting character and Derick had an interesting background, so there was potential to Sweet Deception, but the execution left a lot to desire. I liked Emma's math mind and that she was up her "expressions" - that was endearing. At the end though, I feel there was just too much that was told instead of being shown and that was the downfall. I also feel the author could have developed the hero's story a bit more. I feel that at the end of the day, I still didn't know about him except for his anger at his parentage. Plus, the ending was a bit unbelievable and we didn't really know the villain's motives - why and what he did with the money. Oh, the "can't help themselves" romance and big misunderstanding were the nails in the coffin. Just so used :(

4) One Good Earl Deserves a Lover by Sarah MacLean: C-

I think this one might have gotten a higher grade if I had been in a better mood. However, it is what it is. The beginning of One Good Earl Deserves a Lover was very strong in my opinion. I just enjoyed the dialogues, the exchanges and how Pippa left people speechless LOL. However, once Cross decides to succumb, I kind of lost interest in the storyline. The hero has not been with a woman for six years, so why Pippa? Yes, he was attracted to her, but what was it about her? Is everyone so weak that they can't control their urges? Is it weird that I want reasons for when they behave differently? Aside from the romance, I'm pretty sure there was an intrigue, but quite frankly, I can't remember it ^_^; The only thing that stands out in my mind still is that Pippa was outraged when she found out Cross' true identity... and I can't help but wonder why. She said she did her research and I doubt that it was such a big secret. So she's not very good at it? Also, can Cross really just walk back and claim his title? Meh.

5) How to Misbehave by Ruthie Knox: C 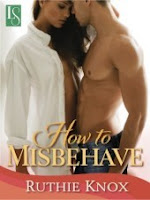 Ms Knox is quickly becoming a favorite author on blogland, but for me, she's more hit and miss. I picked up How to Misbehave because everyone raved about it and it left me a bit lukewarm. Yes, it was hot and sexy, but the timeline just didn't work for me. I'm so tired of hook-ups and that's essentially what this story was about. The hero and heroine have been eyeing each other, attracted. Then, suddenly, they are thrown together because of bad weather, can't resist and have sex. The hero is not into commitment so walks away, the heroine is heart-broken and eat ice cream. However, the hero cannot live without her and therefore, returns and boom, let's be together. Meh. Also, there was a lot of sad stories and sequel baiting. Perhaps if it hadn't been in a novella format, it would have worked better for me.

I was looking for a opposites attract story with my favorite theme, the stuffy shirt hero and happy-go-lucky heroine, and found it with Always the Best Man. Unfortunately, the storyline didn't hit the right not for me, mainly because it was just no fun. The reason I enjoy the stuffy shirt hero and the happy-go-lucky heroine so much is seeing how the heroine thaws out the hero, how perplex he often is in front of the heroine... and that just didn't happen in Always the Best Man. In fact, both the hero and heroine had a lot of baggage in this book and the heroine wasn't as happy-go-lucky as I thought, she just hid behind an acerbic sense of humor. Also, she wasn't as confident as I'd hope. As for the hero, he was more likable, but only because he realized at the end that his thinking was flawed. He'd put his best friend's wife as the ideal woman and figured out he was wrong. Since the title was Always the Best Man, I wished we've read a bit more of him as a best man LOL. Otherwise, I feel they lacked a bit of chemistry and wished they had worked a bit more on their issues. As such, it makes it a bit unbelievable for me that the hero would propose at the end and that the heroine would accept. Overall, not a bad book, but not impressed either.

I don't know what took over me to read two hockey romances one after the other, especially since I'm not a fan of hockey ^_^; However, that's what happened and given that the premises were similar to a certain point, i.e. the hockey player hero getting guardianship of his niece, well I can't help but to compare the two books... and unfortunately, Hip Check was lacking in comparison.

Mainly, I thought it was hard to like the hero, Esa Saari. I can understand resenting getting guardianship of his niece because he has to change his lifestyle, but he's the adult here. At one point, he needs to suck it up and just be there for his new charge, because the kid is what matters. And I don't want him to start making efforts, to change simply to please the hot nanny. I want it to come from his heart and I found that honesty missing in Hip Check. The heroine was a bit more likable. I liked that she chose to become a nanny and that she enjoyed her job, that's what she wanted to do and she was good at it. I liked Maddy's relationship with her charge. It's just too bad she let her father and brother walk over her.

Also, the romance in this one was so-so. I think the sudden attraction between Esa and Maddy was awkward, it needed a little bit more build-up. For me, it seemed that Esa suddenly realized his teammates found Maddy attractive and he decided they couldn't have her. Also, the pacing of the book with the fast-foward in timeline just didn't help the romance.

9) The Autumn Bride by Anne Gracie: B-

10) The Best Intentions by Candice Hern: B-

It doesn't look like so from the grades and number of reads, but I felt February was a hard month for me. Just because there was a period where I didn't really enjoy what I was reading :(  Luckily, the end of the month was so much better! I have to say, i don't remember much of my February month, but given how my reading year is going, I'm happy with 12 books :)

What about you? How was February?
Posted by nath at 7:38 AM