So I just found out tonight that Bleach is over. Bleach is one of the first manga I've ever read. I followed that series for years... and have about 40 volumes at home. Yes, I eventually lost interest or more accurately, didn't follow as obsessively as I used to... but to know that after 15 years, Bleach has come to an end... It truly feels like the end of an era.

I find that the end of a series is always emotional. You never want it to be over, you always want more of the characters you've come to love so much. The longer the series has gone on, the more heart-wrenching the end is... because in many instances, the mangaka is asked to wrap up the series due to loss of popularity/decrease in ratings and therefore, the ending is rushed and not exactly what the mangaka has envisioned :( This is exactly the case with Bleach. Lots of unanswered questions, sigh.

Oh well. We don't get a say :( Now that it's over, perhaps I'll go back and read the parts that I haven't. Even though I haven't been following the series as closely in the past few years, I'm going to miss Bleach, know that it's over... The plot might not have been as strong and stellar as from the beginning, but the art has :) 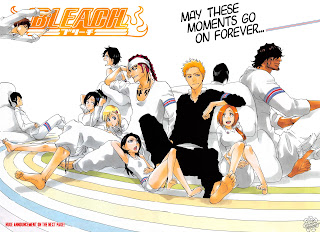