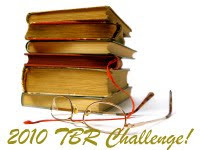 Woohoo, first TBR Challenge of the year!! And guess what? I made it :D Barely, but still :) I had difficulty choosing what book to read - not just for the challenge, but in general... Finally, I settled for Magic Lost, Trouble Found by Lisa Shearin.

A girl with attitude. An all-powerful amulet. This could only mean trouble.
My name is Raine Benares. I'm a seeker. The people who hire me are usually happy when I find things. But some things are better left unfound...
Raine is a sorceress of moderate powers, from an extended family of smugglers and thieves. With a mix of street smarts and magic spells, she can usually take care of herself. But when her friend Quentin, a not-quite-reformed thief, steals an amulet from the home of a powerful necromancer, Raine finds herself wrapped up in more trouble than she cares for. She likes attention as much as the next girl, but having an army of militant goblins hunting her down is not her idea of a good time. The amulet they're after holds limitless power, derived from an ancient, soul-stealing stone. And when Raine takes possession of the item, it takes possession of her.

Now her moderate powers are increasing beyond anything she could imagine—but is the resumé enhancement worth her soul?

The Story: The heroine of Magic Lost, Trouble Found is Raine Benares, an orphaned, elven sorceress with limited power and was raised by her extended family of smugglers. Wanting to help out a friend, Raine finds herself in possession of an amulet and suddenly becomes a very popular girl... but why? Suddenly, Raine finds herself on the run from the goblins' new king, his adviser - a horrible goblin shaman, the exiled goblin prince and the Guardians of the Conclave. Giving them the amulet wouldn't be a bad idea, if only she could take it off without suffocating. Things get even more complicated when her friends are kidnapped, her powers suddenly increase and the amulet is somehow connected to her father, one that she never knew. Who can she trust?

My Opinion: I believe I first found out about these books from Li and bought the first two books last year or the year before. It sounded interesting and it is.

What I found most interesting in this book were the characters. As a heroine, Raine is okay. She's a little bit a female version of Harry Dresden. She's confident, but her confidence doesn't stem from arrogance, but experience. She's not too tough and she goes with the flow a lot :) She's also surrounded by a very good cast of characters. There's her godfather - a retired, powerful mage, Piaras - her godfather's apprentice and powerful spellsinger, Phaelan - her smuggler cousin, Mychael Eiliesor - a powerful spellsinger and also the Captain of the Conclave Guardians and Tamnais Nathrach - a prominant goblin. So yes, an interesting cast of characters, all with different personalities and purposes. So far, I like Piaras the best... He's sort of a younger brother with so much potential. The love triangle is also set up between Raine, Tamnais and Mychael... It's not too prominent in Magic Lost, Trouble Found, but I bet that's going to change in the future books. I admit, I'm not too thrilled at the love triangle (not a fan), but I've decided to root for Mychael :D

The story was okay. It actually started off really well and had a lot of potential. It was intriguing and interesting, but then, became a bit too complex and it started to drag a little at 3/4 of the book. It just didn't sustain my attention and I found myself skimming a few pages here and there. Part of it, in my opinion, was due to the world building. The world building in Magic Lost, Trouble Found is definitively different. It comprises different kind of magic, goblins, elves and humans. There's politic, king and prince and a fragile peace. Again, I think it's interesting... but it wasn't detailed enough. It is not explained or described and as a result, a bit hard to imagine and process everything.

Another thing that made the reading of this book a bit difficult was the voice. I believe the writing is good, but it's simply not fluid enough. I think Ms Shearin has difficulty describing "magical action"... so I stumbled here and there.

My Grade: C+. Interesting characters, story with potential, world building to explore. Not the best fantasy out there, but still enjoyable. I'm going to give book #2, Armed and Magic, very soon :D
Posted by nath at 10:48 PM