Book News: You Belong to Me by Karen Rose!

It's no secret that I'm a big fan of Karen Rose and am always looking forward to her new releases :) I thought that I'd have to wait till June 2011, but turns out I am going to be able to get my hand on her new book much sooner than I expect :P

First, I'd like to thank Tabitha for sharing the news with me :) Since I haven't read about it on any other blogs so far, I figure a lot of people are in the dark as well and this might cheer everyone up :)

It turns out that Ms Rose's next release, You Belong to Me, is going to be released in hardcover in the UK in January 2011!!! Woohoo!!! The US will completely bypass the hardcover release and so, You Belong to Me will be available only in June 2011 in paperback format. The news has been confirmed by Ms Rose here.

When I saw Ms Rose at RT last April, I asked her about Silent Scream being released in paperback, since her last three releases prior (Scream for Me, Kill for Me and I Can See You) have been in hardcover... and she told me that due to the economy crisis, her hardcover books haven't sold as well and thus she was back in paperback. Well I have to say that I am really happy she's big enough in the UK to warrant the hardcover release :) I have to admit, I'm a bit surprised at the decision - it's usually the opposite you know (HC in US, but paperback in the UK), but whatever!! LOL. I'm just happy it means I can read her next book earlier than I thought :) And yes, suddenly, I really, really love Book Depository :P

Plus, I think the UK cover is pretty nice :)
(No US cover yet) 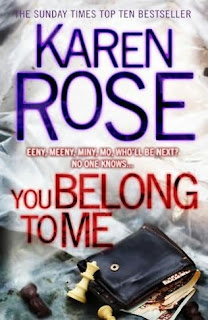 From Amazon.co.uk and Fantastic Fiction:


When forensic pathologist Lucy Trask stumbles across a mutilated body by the chess tables in her local Baltimore park, its face so badly damaged it is unrecognisable, her sole concern is that it might be her old school teacher Mr Pugh. When the corpse is identified, Lucy is shocked to discover that the victim is actually another man from her past. Who killed him and why his skin is burnt with the number '1' is unclear but it's evident that someone is demanding Lucy's attention. The discovery of a second branded body raises worrying questions: how many more lives may be at risk before the killer's final message is revealed? And can Lucy solve the killer's gruesome puzzle before their thirst for revenge is complete?


Years ago, a young girl was beaten and raped while onlookers did nothing. Now those witnesses are becoming victims themselves…

Baltimore city Homicide Detective JD Fitzpatrick has seen a lot of horrific violence, both as a cop and during his deployment in Afghanistan, but nothing like the trail of tortured bodies that are turning up throughout the city. He’s up against a brutal killer with a very personal vendetta. And now JD is beginning to suspect that his medical examiner may be shielding some crucial evidence linked to the case.

Medical Examiner Dr. Lucy Trask is intrigued by JD’s compassion, but she isn’t about to mix work with pleasure. Not while there’s a ruthless killer on the loose. And definitely not while she’s keeping a dark secret that could connect her to these vicious killings—and put her next on the killer’s hit list…