Two weeks ago, I wrote in a post that it'd be fun to review a Christmas-themed book each week till December 25 :) I missed last week because I was busy and didn't feel inspired, but I'm determined to keep it up from now on. I don't know about you, but this year, I'm really in a Christmas mood! :) I've been reading Christmas novels, feel like shopping, even feel like baking! LOL, I'm not because I'm not good at it... yeah, I'm feeling it this year :) And we just got our first snow yesterday, further reinforcing the feeling LOL. What about you? Are you excited for Christmas this year? If not, well perhaps this book will put you in the mood :) 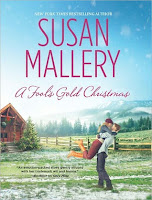 
The unrelenting cheer in Fool's Gold, California, is bringing out the humbug in dancer Evie Stryker. She learned early on that Christmas miracles don't happen, at least not for her. And this year seems like no exception. An injury has forced her to return to the family fold, no matter that they're estranged. She won't add to the awkward scenario by being seduced by the bad-boy charms of her brother's best friend, the last man she should ever want to date. Even when she's recruited to stage the Fool's Gold winter festival, she vows to do as promised, then move forward with her life anywhere but here.

Jaded lawyer Dante Jefferson is getting used to the backwater town he now reluctantly calls home, but the pounding of little dancers' feet above his temporary office is more than any man should have to take! When he confronts their gorgeous teacher, he's unprepared for the attraction that sears him down to the soul. Evie is his best friend's sister--off-limits unless he's willing to risk his heart. Dante has always believed that love is the most dangerous force in the universe, but that was before he had to reckon with the magic of a certain small town, where miracles do seem to happen...

The Story: Evie Stryker is the black sheep of her family - not due to her attitude, but because of the circumstances of her birth. Her mother was newly widowed when she had an affair/one-night stand with a cowboy and Evie was the result. Because of their age differences, Evie was rarely included in the boys' activities and she also felt emotionally neglected by her mother. So when Evie was old enough, she left to pursue her dancing career and it somewhat naturally led to an estrangement with her family.

But things have changed in recent months. Her brothers and mother have all settled happily in Fool's Gold and the last loose end is Evie. As such, they all want a second chance with her to make amends and the opportunity shows up when Evie injures herself. Before she can protest, Evie is whisked to Fool's Gold where she ends up teaching dance and living next door to Dante Jefferson, her brother's business associate and best friend. Being new in town, the two quickly bond... especially when confronted to the town's Christmas enthusiasm. One thing leads to another and soon, Evie and Dante are a couple. But is there any future when neither plan to stay in Fool's Gold?

My Opinion: So, it's been a while since I've last read a book by Ms Mallery - almost a year!! - which is kind of surprising given how prolific the author is. The only explanation I have is the Fool's Gold books simply don't appeal to me. It's a combination of small town overdose - I mean, I've been mixing up the Fool's Gold and Lucky Harbor series and I'm usually really good at keeping characters and storylines straight - and the characters and blurbs not making me go "Ohhhh, I want to read this." Plus, it's been a while since Ms Mallery has really wowed me. The last two books of hers that I really enjoyed were Almost Perfect and Head Over Heels, that's not a lot given how much she's written... Anyway, I wasn't really planning to pick up A Fool's Gold Christmas, but then, I went ahead and read Brie's review and I don't know, thought the book had potential. And A Fool's Gold Christmas did indeed have potential, but I'm not sure if Ms Mallery completely delivered...

The good news about A Fool's Gold Christmas is that I really liked Evie and Dante - as individuals and as a couple. They were likable characters with some interesting background stories. I admired Evie's strength and independence, and not only when it came to her family situation. I mean, to be told that you're not good enough to achieve your dreams (being a dancer), it's hard... and not having the support of your family during those times, even harder. Still, I feel Evie came through it, she overcame the circumstances and was living her life. She resented her mother and I thought that was really understandable, but she wasn't overly bitter and I thought that was mature. She didn't blame her misfortune, she assumed it and went on with her life and that's what I found admirable. As for Dante, I thought he was likable as well. In the blurb, he is described as jaded, but I don't think the right word was used. He might have been in whatever other books he appeared in, but in A Fool's Gold Christmas, I thought he was friendly and caring, ambitious and focused. And as I couple, I really liked them together. They had chemistry and were a good match for each other. I liked the teasing and how they bonded over being newcomers to the town and being overwhelmed with Fool's Gold Christmas' spirit. I liked how they became a couple, it worked :) What didn't work for me though was Dante's stupid lie at the end of the book to break off things, breaking Evie's heart in the process... and him coming back and being forgiven. Ugh. First, I'm really tired of any character walking away and coming back because they realize their mistake. Seriously, it's not romantic at all! I'd really rather they communicate their fear, their concern and work it out together like, I don't know, mature adults! Second, she took him back too easily without any groveling! I think she could have made him worked a bit for the broken heart she got.

Something else that didn't work too well for me was the Strykers' situation. As Christmas' spirit demands, the conflict between Evie and her family was resolved... and I'm not convinced on the sincerity of all parties. Actually, I would have loved to read about Evie and her family's conflict in another book, one that was not Christmas-themed. I think it would have allowed more focus and development on the conflict than what we got in A Fool's Gold Christmas. I felt that Evie's resentment and anger towards her family and especially her mother were entirely justified. All her life, nobody in her family really cared about Evie. And it's not simply Evie's imagination. There were actions and events that showed the lack of caring. I simply can't imagine living through what Evie has. It wasn't physical abuse, but in my mind, it was definitively some kind of emotional abuse and negligence... And I don't think years of that kind of abuse can be resolved in a few days, simply because the other parties - the brothers and the mother - want to. While I really disliked the mother for her selfish attitude, I did at least see some efforts made in the book. I can't say the same about the brothers... and I think they are as guilty as the mother. Yes, there was an age difference and they were kids themselves and probably took their cue from their mother, but they've been adults for a long time now. They should have cared more about Evie. Now they want a second chance, but I'm sorry, I didn't see their actions backing up their words. There was definitively a bond between Evie and Clay and they had kept in contact and all... But Rafe and Shane? Suddenly veto-ing Evie's new boyfriend is not enough. As for the mother, as I mentioned, she made some efforts... But in many instances, it felt like she was playing the victim. Asking Evie if she hated her... What is Evie supposed to answer to that? I liked that Dante brought a different POV to Evie, that life is short and she doesn't want to be estranged with her family forever. However, there was a big difference between Dante's mom and Evie's and that is Dante was always certain of his mother's love for him. Anyway, it's not that I didn't want the conflict to be resolved.... but the way it was done was too simple for the complexity of the situation and as a result, the feelings didn't feel genuine.

Other than that, A Fool's Gold Christmas was kind of cute, with all the activities, decorations and Christmas spirit. I say kind of because, well, I'm more like Evie and find the whole thing a bit overwhelming LOL. I do wonder if there really are towns that pull all the stops like that out there ^_^; In addition, we got to see a lot of previous characters, but without them overtaking the spotlight which was nice.

My Grade: B-. In the end, I'm glad I picked up A Fool's Gold Christmas because I liked Evie and Dante and their romance :)
Posted by nath at 12:29 PM