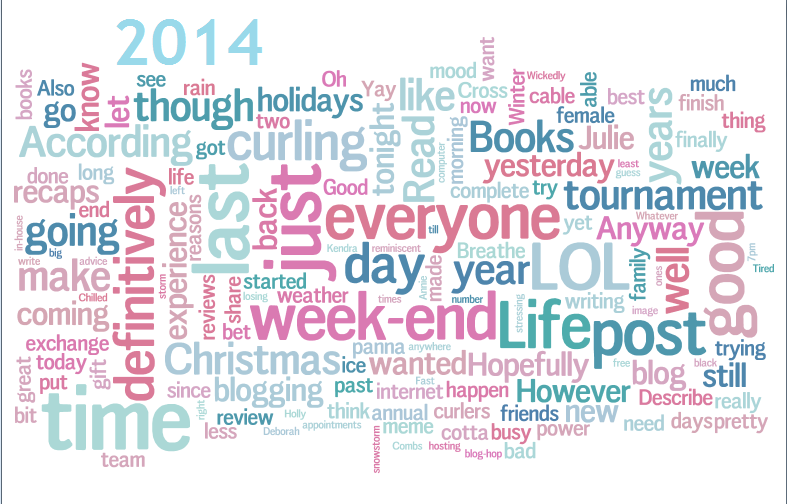 Back by popular demand, here is my numbers post :) I've had the numbers compiled for a while, but haven't had the chance to put this post together until now. I'm so happy to finally have a post up and one about books, yay!! Enjoy all these numbers LOL.

This number is always the most important, isn't it? The one we care so much about LOL. My goal in 2014 was 175, so being up 4, I'm quite happy. It's also the most books I've read since 2011 :) The one thing that bothers me a bit though is that part of that 179, 8 were The Kraken King since I read it as a serial ^_^; In addition, there were a few very short novellas... so it does feel like the number is somewhat boosted. Oh well, I'd rather reach my goal and has that feeling, then count The Kraken King as one book and be short and so close of my goal ^_^;

I've been working hard on lowering this number in the past few years and been quite successful :) However, this year, I have a jump of +30. I don't mind it that much because I know exactly what happened: Chapters closing. On that shopping spree, I bought 38 books!! So had it not been for it, I would have been -8. Not bad :)

This year, I wasn't such an avid customer of Book Depository. Well one explanation is the Canadian dollar losing some of its value, so the exchange rate wasn't as advantageous for me. Plus, Chapters/Indigo had quite a few sales... And of course, there were a few trips to the States :) So the break-down is as followed:

Basically, I've stayed consistent for e-books and my numbers for online and in-store just switched up. Many wonder why I haven't converted more to e-books and it's basically because buying e-books is not cheap. First, because you don't get discount on books from main publishers... and also, because I pay two taxes on e-books (federal and provincial) while only one on print books (federal). Weird, I know, but that's how it is. And the provincial tax is 9.5%, so not negligible!!


What did I read?

Genre-wise, I don't feel like there's been much change in my reading. Contemporary romance is still leading the pack. I am surprised that YA came in second, but I think it's because I binged on certain authors such as Julie Cross. New Adult being all the rage at the moment, it's no surprise that that number increased. The genre with the biggest decrease was category romance and for that one, I think it's a publisher thing. I usually read Harlequin KISS and I think there was a re-structuration or something because there weren't that many released. Plus, it seems many of my favorite category romance authors decided to try something different...

Quite frankly, I have no idea what to expect from 2015. I don't really know where the romance market is heading, what's going to be the new hit...  Guess I'll have to wait and find out.

Well wow. I still read a lot of mainstream publishers, but look at that! The self-published and e-publishers books are increasing! Slowly, but surely!! Of course, that has a lot to do with my favorite authors trying different route and me being a follower LOL. Still, it's nice to see. I'd also say if you're a new author, I'm more likely to pick you up if you're with Penguin, Harlequin or Harpercollins. I know that Hachette still releases a lot of romance, but I don't know... I feel they don't do such a great job at marketing. I mean, I see them around at the bookstore and on blogland... but aside from Jill Shalvis' Lucky Harbor series, nothing stands out in my mind for that publisher. Also, I need to give Sourcebooks another go. In the past few years, I've been shying away from that publisher because I don't seem to click with their books... but I think it's time to give it another go.


When were they published?

Yep, I'm a current reader. That hasn't changed... which is kind of sad considering the state of my TBR pile. In other words, if I don't read a book in the two years following its release, chances are slim that I'll ever pick it up... Maybe it'll change one day, but I seriously doubt it ^_^;


How did I enjoy the books? 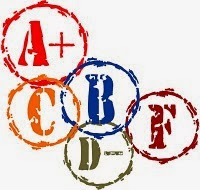 Seems like my grade distribution has been very consistent compared to last year. I still have difficulty to dole out A grade. Perhaps I'm being very picky. At the same time, it means if I give it a A, it automatically makes it to my Best and Faves list :)

In any case, I think I'm fair with my grading. Or at least, it really reflects what I think of it, how I feel about it :)

I'm skipping this section, because I know I didn't ^_^;

This number is pretty similar to last year and I'm quite happy with it. It's actually more than I expected LOL. I mean, I know myself. I'm very picky when it comes to trying new authors... It needs a nice cover, a good blurb or lots of recommendations... but this number shows that I'm trying ;)

What can I say? This is how it's been the past few years and it's not changing.

There you go. My number post... All in all, I feel that I'm a very consistent reader... which makes for very boring comments because really, they're the same year to year LOL. Still, I think it's fun to have these numbers and be able to compare from year to year :)
Posted by nath at 9:39 PM

Sorry for the silence ^_^; This is definitively not how I wanted to start the year. I'm going to try better, but truthfully, my blogging might only pick up after curling season. I checked the calendar and till the end of February, curling is ruling my  life LOL. Hopefully though, I'll find time to put together my 2014 recaps.

By the way, one of the reasons I was so busy last week-end was the Debutantes tournament. It's a tournament for female curlers with 5 years or less experience (not years old LOL). The past two years, I've been wanting to participate, but always missed it for some reasons. This year though, I made it... and my team won!! 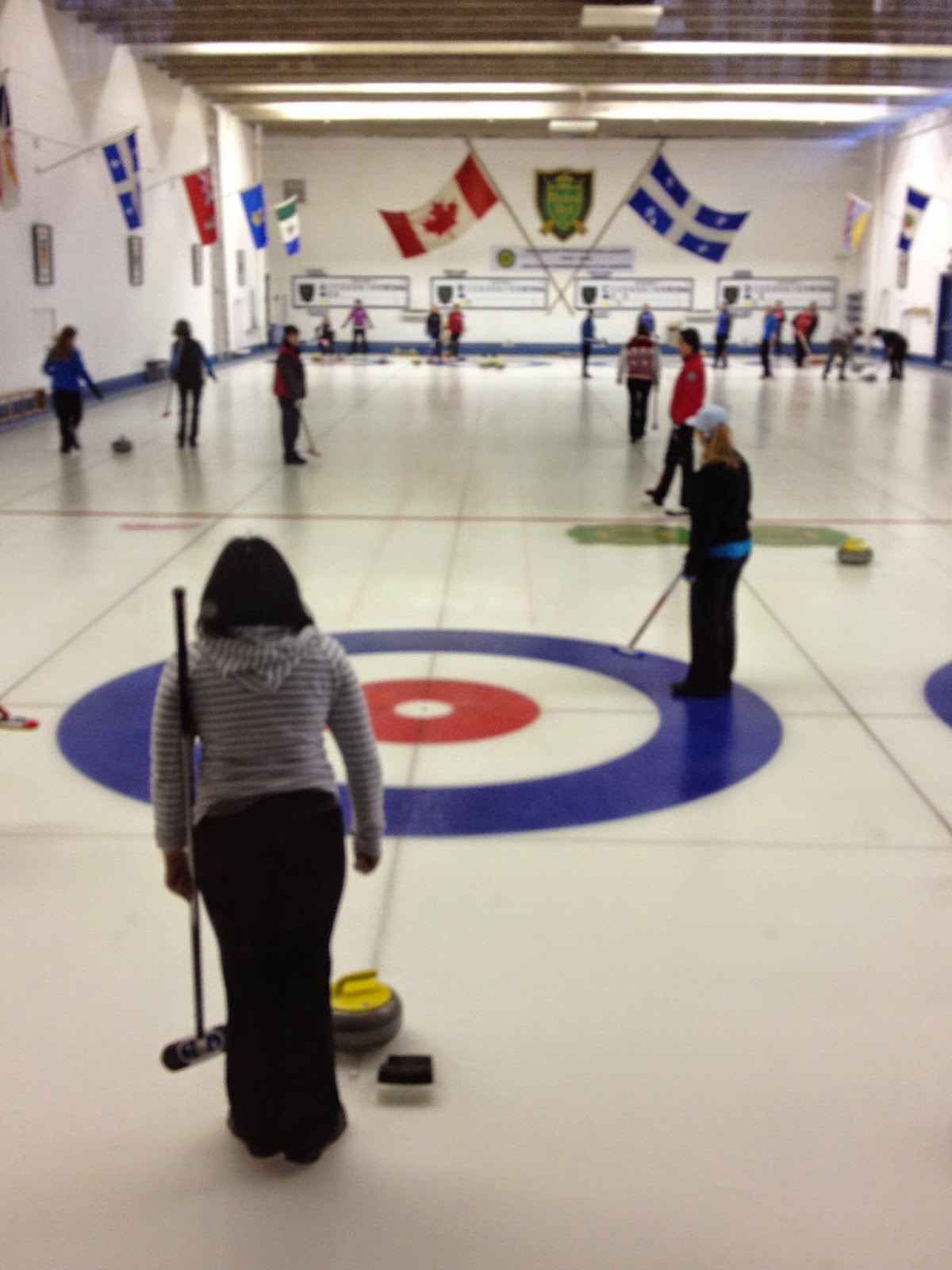 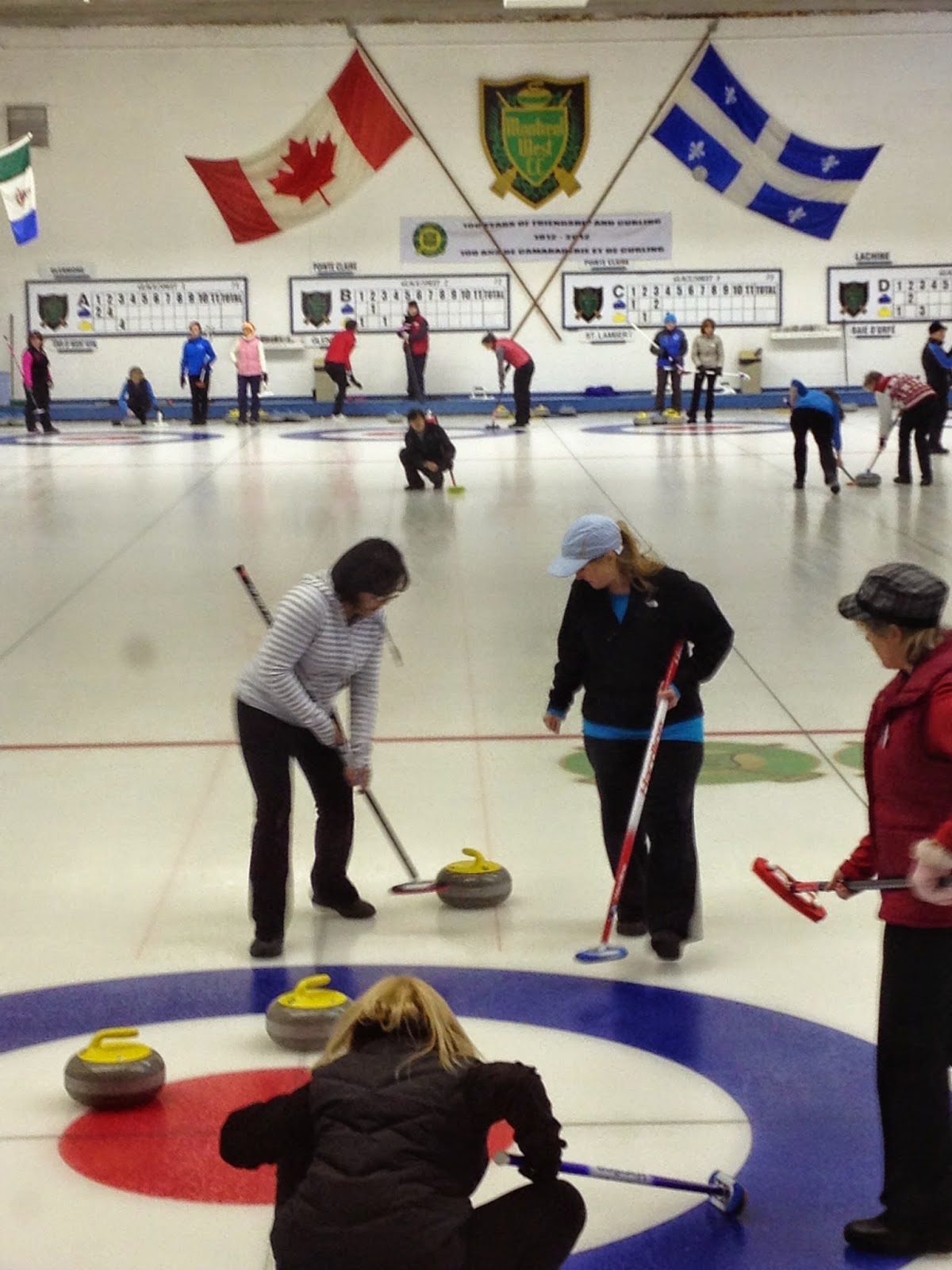 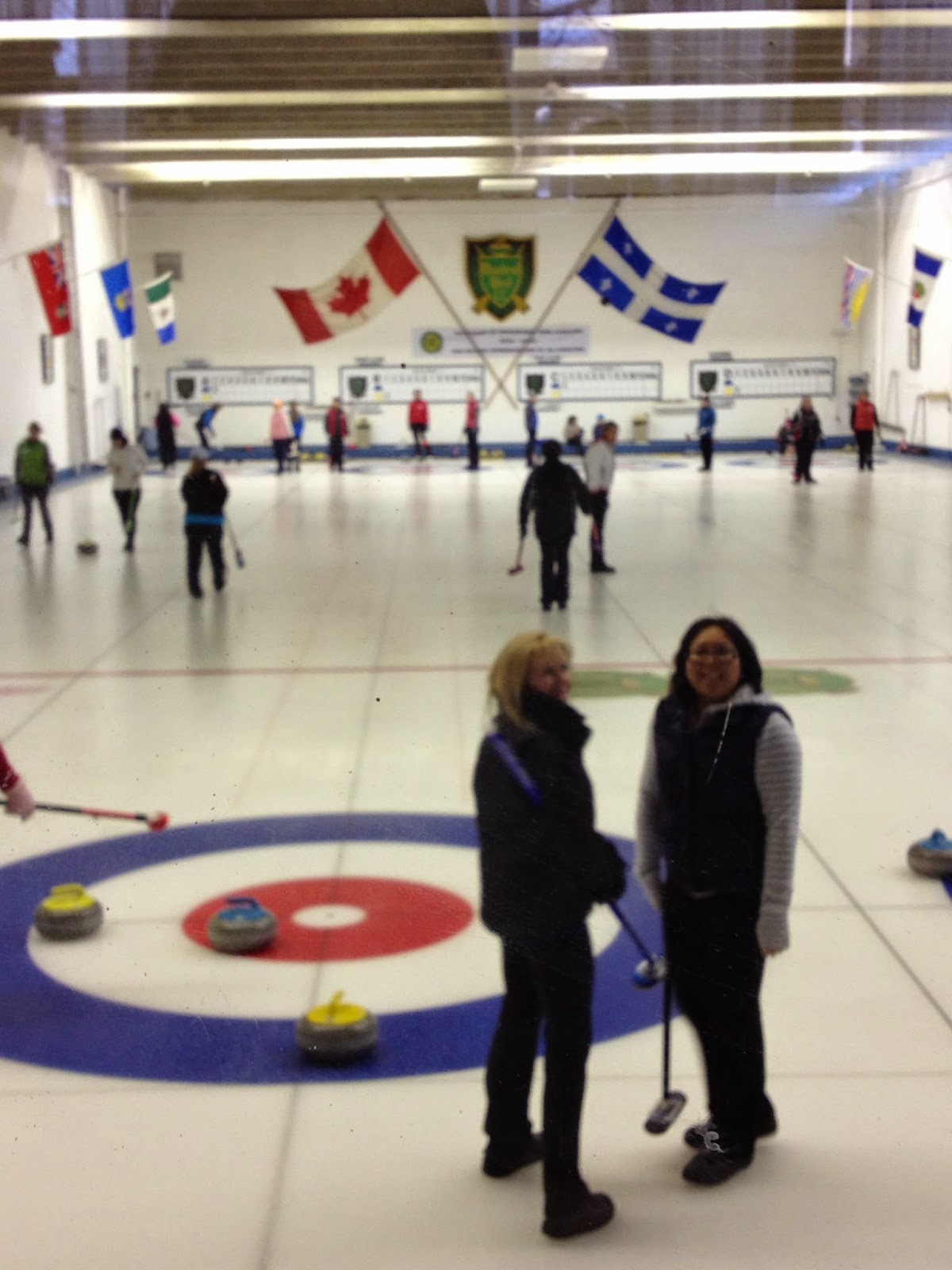 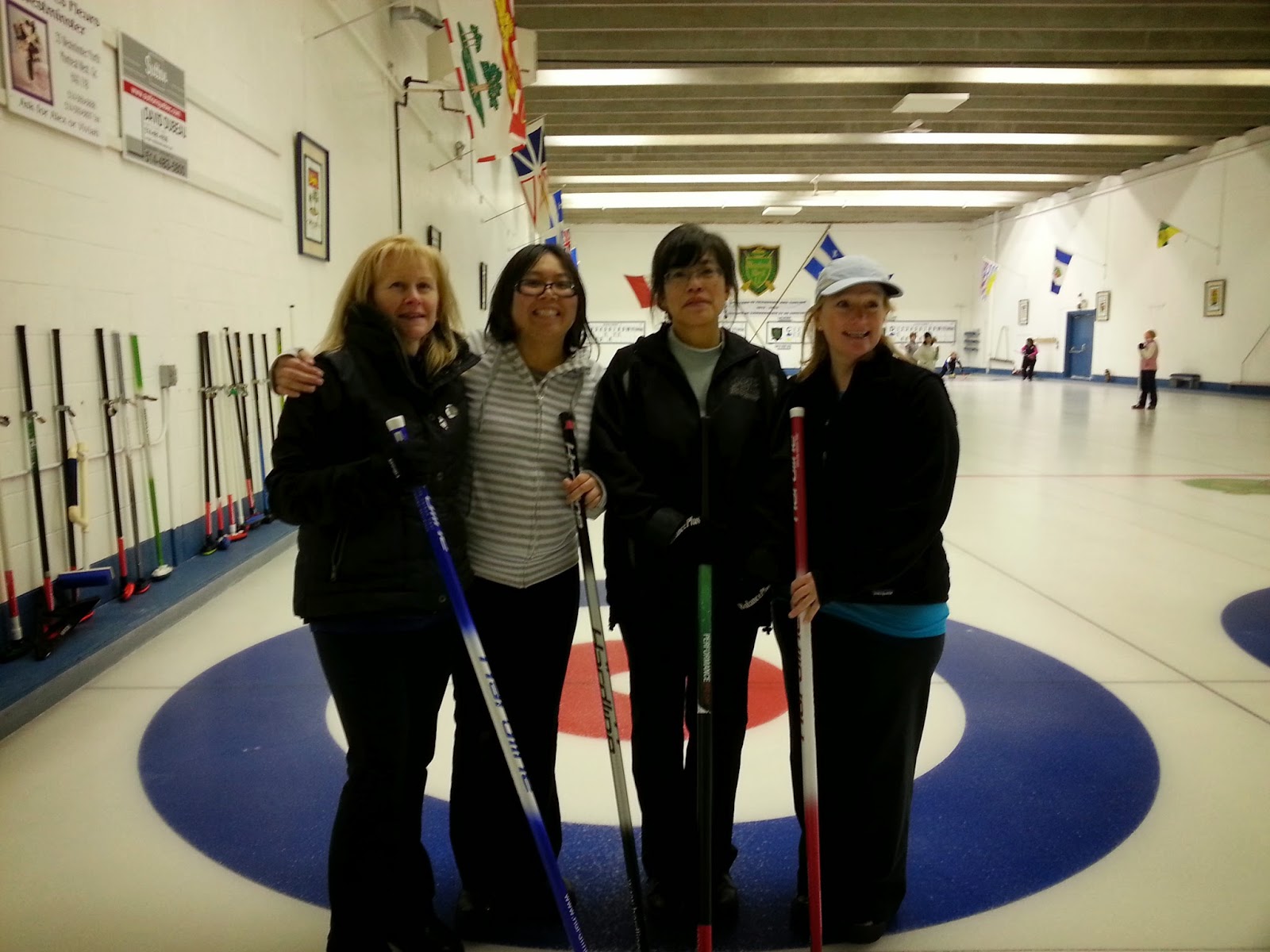 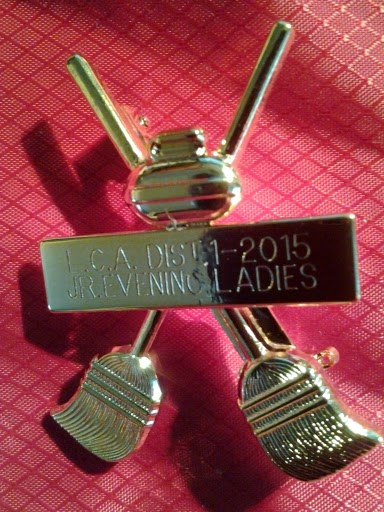 It was really a great experience. I knew we had a good team and the odds were good, but to win it... Yay!! Now, onto the next tournament which is for female curlers, 7 years and less experience!

Anyway, just wanted to share and let you guys know what I've been up to :) What about you all? Anything exciting?
Posted by nath at 8:37 PM

My Life According to Books I Read in 2014 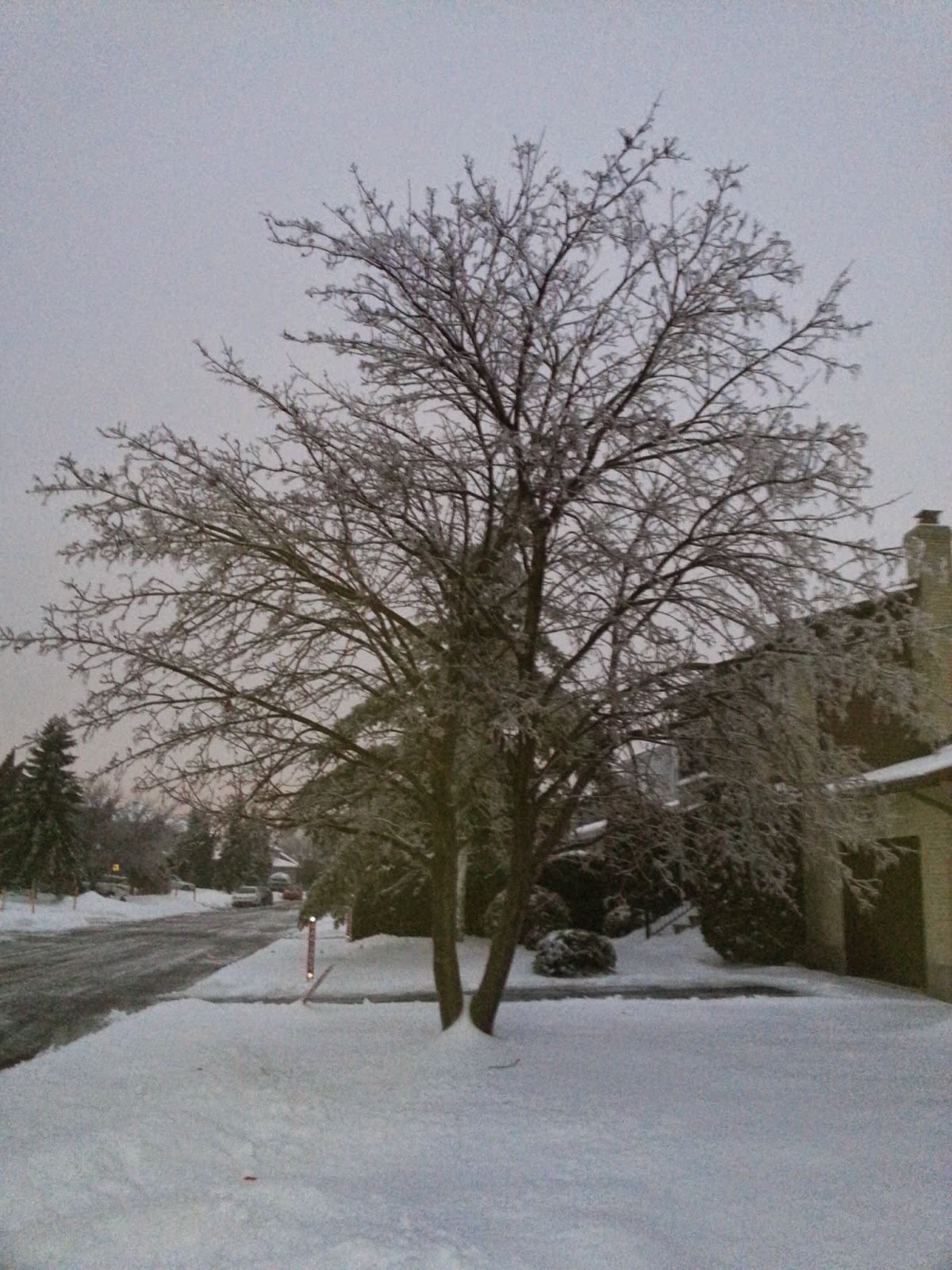 Okay, let see if I can post this up this morning. Jeez, you wouldn't believe the day I had yesterday. The weather this past week-end has been pretty bad. We got 15cm of snow (6 inches) on Saturday which in itself, was not too bad. However, it was followed by rain/freezing rain the whole freaking day yesterday! And to top it up, the temperature plunged back to -13C (8F) during the night. I haven't gone out yet, but I'm pretty sure it's going to be a huge ice rink... oh and there's the gusts of wind!Brrrr.  But the very worst yesterday was losing power due to the freezing rain. From 9.30am to 7pm. It was a bit reminiscent of the ice storm that we had in 1998 - not a good memory!! I've been off two weeks and had planned to spend my last day catching up on my blogging, cataloging and spreadsheets... Let say it just didn't happen. So happy I now have a smartphone with data plan! But it still cannot replace a computer with internet in certain aspects.

Anyway, once power finally came back, I had a bit of time to blog. Decided to complete the "My Life According to Books I Read in..." meme. I like this meme because it fits so well with all the yearly recaps and wrap-ups. Of course, when I was ready to post, well I lost the cable - i.e. internet, phone and tv cable. Didn't lose it long, but long enough that I cut my losses and just went to bed ^_^; But at last, here it is! :)


Describe yourself:
The Collector by Nora Roberts

How do you feel:
Chilled by Kendra Elliot

Describe where you currently live:
The Winter Long by Seanan McGuire

If you could go anywhere, where would you go:
Life in Outer Space by Melissa Keil

Your favorite form of transportation:
Fast Track by Julie Garwood

Your best friend is:
Wickedly Wonderful by Deborah Blake

You and your friends are:
Gifted by Kelley Armstrong

What is life to you:
Flirting with the Forbidden by Joss Wood

What is the best advice you have to give:
Breathe, Annie, Breathe by Miranda Kenneally

Thought for the day:
Whatever Life Throws at You by Julie Cross

How I would like to die:
Sun-Kissed by Laura Florand

My family is:
Closer Than You Think by Karen Rose 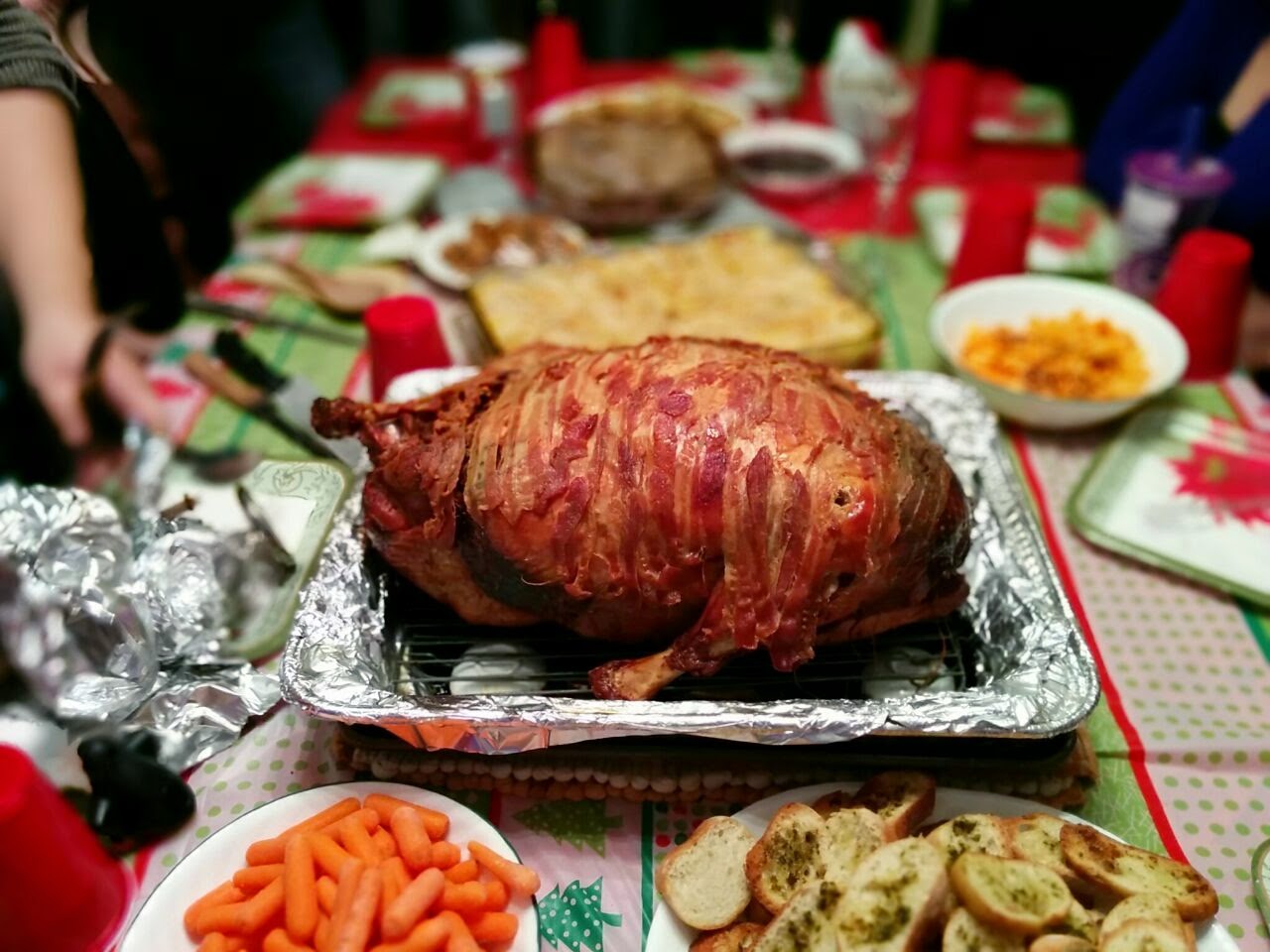 Hope that everyone had great holidays! I meant to blog since the last post... but between curling, the annual gift exchange and the holidays, things have just been so hectic! Seriously, I think I need a vacation to recover LOL. I've been off since December 19th and thought that after the turducken dinner with some friends on the 23th (picture above), I'd be free to rest and relax. However, it feels like I've been spending my time running around ^_^; Ah well, still a few days left. Going to make as much of it as I can :)

I don't really want to make any resolutions this year, because I never keep them ^_^; However, I definitively want to make an effort to blog, blog-hop and comment. Hopefully, that'll happen. Actually, I've started the new year well as Ames and I have our new releases post up at Breezing Through :) We're trying out a new format, so check it out and let us know what you think :) Also, I've finally finished updating my spreadsheet today and so, should be able to write up my number post and recap in the coming days! One thing I've also decided regarding blogging is that I'm going forward. That means no trying to catch up on all the monthly recaps that I haven't done in 2014 or reviews. If some of them call to me and I end up writing reviews for them, good ;) Otherwise, I'm not forcing myself to go back.

Oh, and I definitively need to detox from all those Facebook games. They're wayyyyyy too much time consuming! LOL.

That's it for me, for now. I promise though, soon, I'll be talking books!! Stay tuned!