Sorry for the long silence :( I had a crazy week a couple weeks ago and well, it just snowballed from there. So, wassup with everyone? :P

Me? Well I managed to finish the pictures slideshow in time for the 25th anniversary thingie at work. It was a close call and well, not sure it was appreciated... but oh well. It's done and hopefully, by the time the 30th anniversary rolls in, I won't be there anymore. Then, my sister and I met up with some cousins in Maryland... somewhere in the suburbs of Washington D.C. :P Remember I attended a wedding in Annapolis two years ago? Well, this time, we celebrated their 2nd wedding anniversary :) Ever since the wedding, the 6 of us have been trying to stay in touch and have decided to meet once a year. Last year, it was in Boston for their grandfather's birthday, This year, we decided to meet up in Maryland :P Once again, we ate way too much LOL. We also went raspberry and apple picking, walked a trail and just hung out :) 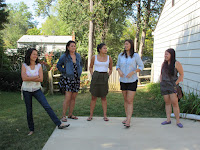 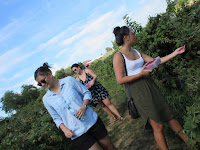 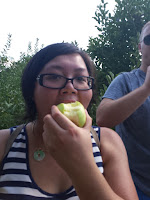 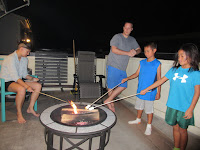 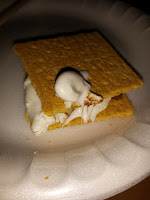 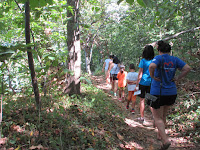 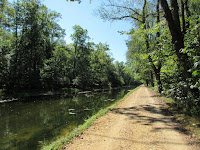 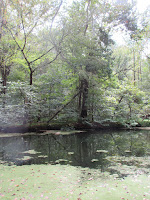 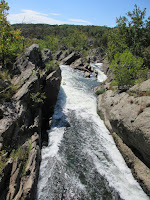 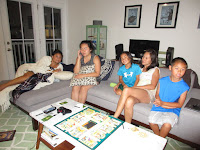 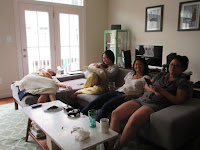 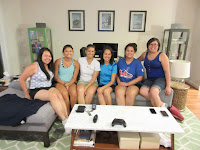 We had a great time that week-end. The weather was gorgeous and the company, excellent :) It was just nice to be together. It was also quite novel not to have any parents, herding us around LOL. Next year, we're hoping to meet up in Germany for my another cousin's wedding :) Also, one of the girls just got engaged after the week-end, so perhaps another wedding :P

I meant to blog when I came home, but well, had to get back into a routine... and then, got into a reading slump :( I just didn't know what to pick up... and I think I burned out a bit on contemporary romance. I wanted to read urban fantasy, but just didn't know what book to pick up. This month, I won`t get double-digits of reads. Oh well :( Luckily for me, yesterday was release day... I'm eyeing the new Jim Butcher's book, The Aeronaut's Windlass. I also got an ARC for Ms Bowen's latest Ivy Years book, The Fifteenth Minute! Also, next week, Ms Hooper has a new FBI SCU book coming out, Fear the Dark, and it seems one of my favorite couple will be back!! Yay!! So I think I'm about to be rid of this reading slump :)

I think one thing that has contributed to my reading slump is I got hooked in this Chinese TV series, Nirvana in Fire. 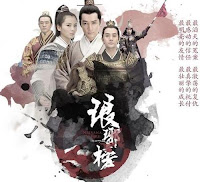 This TV series is a novel adaptation. It's basically a court intrigue/political tv series. It was filmed in 2013 and was supposed to air in 2014, but got pushed back. Finally, it's on right now!! It started on September 19 and the release schedule is 2 episodes a day, every day!! It's 54 episodes... Let just say that I'm in heaven! The tv series sounded good from the trailer, but actually watching it? The production quality is top-notch, the story is excellent and the actors? Amazing!! So yep, that's my current obsession :)

And there you have it, what I've been up to :P I hope that October will be a better reading and blogging month. Or at least, I'll manage to put up one review!

Told ya that having to do that picture slideshow would be beneficial to my blogging! Yep, I am procrastinating... I still haven't started it ^_^; The last few days have exhausted me, so I took it easy today by watching all the sporting events I could - baseball, curling, showjumping and now tennis. It just sucks that all the persons/teams I was rooting for lost :( Well except for tennis... I don't really care for either Federer or Djokovic, so may the better player win - which at this point, seems to be Djokovic.

So yesterday was the Romance Author & Reader Event, RARE :) I've really been excited for the event and to sum it up, had a blast! First, my kudos go to Amy Jennings, Adriane Leigh and Teri Maxwell... because I can't imagine that organizing such an event is easy. The amount of work, patience and stress must be tremendous and I hope they found it was worth it all!

As I mentioned in my previous post, I didn't know many of the authors attending... and in the month that I had to rectify things, only added one author to my "authors read" list - Emma Chase ^_^;  The good news is that I loved Sustained (going to try to review it soon, I promise!) and the not-so good news is Ms Chase couldn't make it in the end due to family emergency :( All this meant that my list of authors I wanted to see what quite short: Sarina Bowen, Daisy Prescott, Laura Kaye and Jennifer Probst. As such and because I was a local, I decided to volunteer for the event and offered to help at the registration. The signing was split into two blocks: 10am-11.30am and 12.30pm-4.30pm. The first block was strictly reserved for people who had purchased VIP tickets and the second block was for both VIP and General Admission ticket holders. I initially only had a GA ticket because by the time I found out about the signing, the VIP tickets were sold-out... but since I volunteered, I was allowed in along with the VIPs :)

My first stop was of course Ms Bowen as she was the reason I attended RARE :) I think I was the first person at her table and since there was nobody else after me, was able to spend some time and chat with her. I of course gushed about how much I loved The Understatement of the Year and Him and we talked about covers and some of her upcoming projects. Already, that made my day... but while I was talking to her, Elle Kennedy showed up!! Ms Kennedy has social anxiety, so she wasn't officially participating to the signing, was only there to keep Ms Bowen company... but still, I got to meet Sarina Bowen and Elle Kennedy!! (I don't really know how many people at the signing realized that Ms Kennedy was present) And as a bonus, I got signed copies of The Deal and The Mistake!! That was definitively the highlight of the signing for me :)

Then, I went to see Daisy Prescott, Laura Kaye and Jennifer Probst - completing my list :) The big difference between RARE and the other signings I've been is that RARE had a lot more self-published authors. That's a good thing for everyone... However, getting their print books is a challenge. That's why most self-published authors had pre-order forms and brought books themselves. Attendees were warned that authors would have very little extra books... That made it easier for me to restrict myself :) Still, I did break down and visited a few extra authors: Alice Clayton, Leddy Harper and Tillie Cole.

All in all though, it was a good thing I was helping out at the registration, because otherwise I'd really be broke LOL. Seriously, I spent money every time I stepped into the room.

So yeah, RARE 2015 was fun :) You can get a feel of what the atmosphere was from this video interview with Adriane Leigh, A lot more relax and chill than RWA or RT LOL. I also enjoyed doing the registration because I got to see how excited everyone was. There aren't many signings in Canada and surely not this big and in Montreal, so it was awesome to be part of it :)

Gotta say, I love those badges!! They are great keepsakes! and the swag I got was from visiting seven authors... Can't imagine how much I would have brought back if I've been to all of them!
Posted by nath at 10:44 PM

how are you doing? Hope everyone's good! Things have been a bit hectic on my end this week. Everything just seems to be happening one after another. Ugh. I thought I had found my blogging rhythm... but seems I was wrong. Or it was so fragile it didn't take much to disrupt it :(

Although, to be fair, I can't blame it all on this week's events. A lot of it has to do with reading. I've been on a roll these past few weeks. I read 23 books in August!! I can't remember when's the last time I read 20+ books in a month... and so, as you can imagine, between reading and blogging, I chose reading LOL.

There are a few reviews I want to write! Plus, tomorrow is the RARE 2015 event... so I'll definitively have things to blog about. However, next week seems to be quite busy as well. Then again, my reading has slowed a bit and I've been roped in to do a pictures slideshow for the department research day 25th anniversary... Yeah, sounds fun right? I've been procrastinating on that (due next Wednesday with a pathetic number of pictures) and so, that might nudged be towards blogging :) After all, I'm writing this post, no? :)

Hopefully, more will come soon! In the meantime, have an excellent week-end!